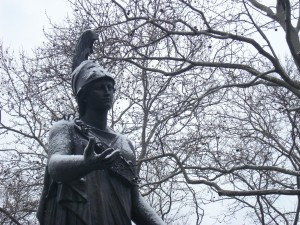 The seasons are clearly on the cusp along 30th Ave.  Spring’s trying to come through but one night last week there was a snowfall.  The next morning, the statue of Athena in Athens Square Park was lightly dusted with white.

On an NYC Govt. webpage about the park I learned that it was first designated as a playground in 1963.  Then with an injection of city funds in 1990 it was redeveloped with the central “amphitheater” space, benches for gathering (and chess-playing) along the perimeter, and playgrounds on two sides, which are still there now.   The community group that promoted its renovation, Athens Square Inc, said its intention was to create “a little bit of Athens in Astoria.”

The same webpage says that before it became Astoria, this part of Queens was known by the Native American Algonquian name of Sunswick, derived from Sunkisq, meaning “woman chief.” 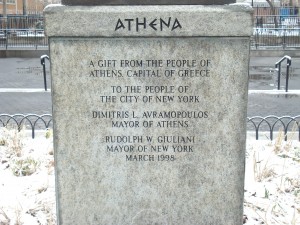 1 reply on “Athena brushed with snow”

[…] “Athena brushed with snow” – a previous post about Athens Square […]