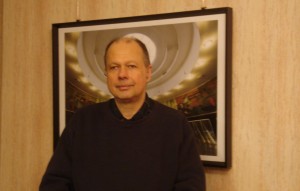 This week’s interview, on 22 January, was with someone who does not live or work on 30th Avenue but who knows a lot about it.  Bob Singleton is the Executive Director of the Greater Astoria Historical Society.

When historians walk down a street, he said, they see things not only in three dimensions but with a fourth dimension too – time.  His interview provides a fourth-dimension perspective of 30th Avenue:

“We’re speaking in the offices of the Greater Astoria Historical Society on the 4th Floor of the Quinn building, in the heart of Long Island City.

The society represents the neighborhoods that comprised Long Island City, one of the three cities that formed greater New York in 1898 – New York, Brooklyn and Long Island City.  The goals are to use our past not to weep for what’s lost, but to help build the future.  We aim to help people understand and appreciate the heritage of this wonderful neighborhood.

We have some information on the actual birth of 30th Avenue.  The original landowner went to Astoria Village and said he wanted to donate some land to start as a street.  That was back in the 1850s.  It ran from the East River all the way to 51st Street, which at that time was the border of Long Island City.  At the beginning, 30th Avenue was simply some empty lots that weren’t filled.

Then the trolley cars started to run along it in the 1870s and 1880s.  Small buildings started to line the trolley route.  They were mostly houses.  In those days the area was well spread out, and most of the shops were along the major streets such as Steinway, Astoria Boulevard or Vernon Boulevard.  The shops on 30th Ave came later.

1917 was really the big boost of Grand Avenue, as it was called then, when the elevated train was put in and a station was put up on Grand Avenue.  Literally overnight the area became developed into what we see today.  It was lined with mostly three-story buildings, some higher.  You had the shops and stores on the ground floor, and then in many cases those days the actual owners of the shops would live upstairs.

In the early days there were a lot of German stores.  Also many of the shop-owners were Jewish.  The shop-owners living upstairs were really part of the neighborhood.  They supported the softball teams and local charities.  There was a wonderful relationship among 30th Avenue people that started at that time and still exists to this day.

The name changed from Grand Ave to 30th Ave at some point in the 1920s.  Queens adopted what is called the Philadelphia system, in which avenues run East and West, streets run North and South.  It was a grid that was imposed on the whole borough of Queens.  The reason being, Queens was actually an amalgam, with different townships and villages, so there were a number of different Washington Streets, Main Avenues and so on.  They decided it would be better to have just one system for the whole area.

Of course populations change, and retailing changes over the time.  So what used to be mainly retail stores, small five and ten cent stores as they called them in those days, small grocery and clothing stores, began to evolve.    Today if you walk down 30th Avenue you still see some of the original buildings.  For example the original police precinct and the original Long Island City Firemen’s Association.  The police precinct building is now the HANAC [Community Services Center] building.  The Firemen’s Association is now a medical clinic.  But as you go between the area between 31st and Steinway Street, which is considered by many people the heart of 30th Avenue, you’ll now see many outdoor cafés, and many food specialty shops.  The Greek and Italian communities are well known for their fabulous food and a café society.  30th Avenue today is in as much demand today as it was when it was first laid out many years ago.

It’s hard to say precisely how it will change in the next 10 years.  We are seeing much more housing, and taller buildings being put up on 30th Avenue.  So it will become much more densely populated, in terms of structures.  You’re getting a lot of other ethnic groups too – Bangladeshi, Arabic, Albanian, Mexican, Brazilian etc. – so the area will become still more diverse than it is today.

You are also seeing another interesting demographic, and that’s young urban professionals who are moving to New York City.  Unlike in the mid-20th Century, there is a big movement for the best and brightest of our society from all around the world to move into urban areas.  That’s even in the United States, where the suburbs were the thing in the mid 20th Century.  I think people are rediscovering the benefits of living in a community like ours.

If you walk down 30th Avenue you see all the things that make a neighborhood great.  You see vitality, you see interesting people, you see excitement, a buzz in the community.  30th Avenue is one of the finest parts of what is a fabulous neighborhood.  One thing we say about Long Island City and Astoria is that is has all the benefits of a great city with all the wonderful aspects of a small town.

I think the future of 30th Avenue in particular, and its surrounding Astoria and Long Island City, is very bright.”

[…] more on how 30th Avenue was in the past, see the interviews with Bob Singleton of the Greater Astoria Historical Society and a group of Astoria old-timers at Corner Delights […]