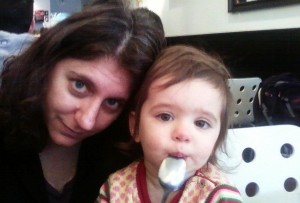 On a hot day last summer a group of mothers and babies clustered around one of the picnic tables in Astoria’s Studio Square beer garden.  Chile was playing Spain in the World Cup.  The mothers were penned in by pint-clutching Chile fans riveted to the game on a big screen at one end of the garden.

I was there with two-month old Jack snoozing in his stroller.   I was enjoying watching the older babies playing on the table, amazed that one day he’d be like that.  They were smiling and sitting.  Holding things!  One of the other mothers was novelist Marcy Dermansky, with her then eleven-month old daughter Nina.

A New York Times journalist was present too, profiling Dermansky’s latest novel Bad Marie.  The novel is about a nanny, the eponymous Marie, who runs off both with the father of the baby she’s looking after and the baby herself, two-year-old Caitlin.

This weekend I interviewed Marcy for this website, accompanied by our babies.  Jack is now sitting, holding things and smiling a lot.  Nina is almost counting to six.   I asked Marcy whether she feels she would have written the Caitlin character any differently now that she has a daughter of her own (the book went to print just before Nina was born).

“So far I feel like I haven’t got anything all that wrong,” she says.  “But I think if I were writing it now I might not feel as much sympathy towards the Marie character.  She does something so bad.   People make jokes about my babysitters running off with Nina – and well…”

“You don’t find them so funny?”

“No.  So I think maybe it would have been harder to write her if I had had a child of my own at that time.  My friends with little babies read that book and it makes them uncomfortable.”

Marcy was raised in Englewood New Jersey.  She has also lived in San Francisco, New Orleans, and spent a year in the Dominican Republic (“My husband had a job for a start-up translating company there, and I had a year of working on a book and swimming.”).  She moved to Astoria ten years ago.

“I certainly didn’t know I’d be here for this long.  I came to New York and people said ‘move to Queens, it’s happening, and its cheap’.   We like it so we’ve stayed and have moved a couple of times around here.   Astoria is very community-oriented.   I’ve almost liked it better since having Nina than beforehand, which you wouldn’t necessarily expect.  Suddenly I know my neighbors a lot more.  I keep meeting mothers with strollers.  People are warm and helpful.”

Her short story “Waiting for Big Bird” is set in Astoria (specifically in Café Bar on 34th Avenue) and is coming out in a forthcoming anthology called “Forgotten Borough – Writers come to terms with Queens.”  But she says: “That’s the first time I’ve written about Queens.  I think with fiction a lot of times you write about a place after you’ve left it.  I’ll probably write more about Queens when I live somewhere else”.

Dermansky does some of her writing in 30th Avenue cafés.  Like Harissa (“the food is always delicious”), Gian & Piero bakery by 45th Street (“it’s near an excellent playground”) and Brooklyn Bagel & Coffee (“Nina loves their chairs”).   As well as writing her own fiction she edits other people’s novels and stories and writes film reviews.  She used to have a daily writing schedule.  Now it’s Nina who determines when she does and doesn’t write.

The hardest part of writing a novel, she says, is coming up with the initial idea.  “Once you have the idea, you can just write for a couple of hundred pages.  That’s what I like about writing novels, they’re long.  Every day when you start working you have this book and you keep writing it.  The hardest time for me as a writer is when you finish a novel.  Starting a new one is very daunting.

I don’t have a gazillion ideas and don’t believe in inspiration.  I have to just sit in front of my computer and force myself to work.  Then an idea will come.  So I don’t normally start with an idea raring to go.  I just have to force it.”

For Dermansky, one of the measures of success of a novel is the ending.  “I think that it’s when you get to the end of a novel – anybody’s book, not just mine – that you know if it works.   If you get to the end and think ‘that’s right’.  Sometimes I like to make people cry with my work.  That’s always the best thing you can do.”

Dermansky’s characters can take on lives of their own.  “I love it when my characters just do something.  In Bad Marie, Marie goes to Paris.  I didn’t know she was going to do that until she went there.  My characters start making decisions without my planning it, because I don’t plan my books.   They become these creatures in my head that just do things.  Sometimes I get upset if bad things happen to them but I just go through it.  It’s a fun process.  I like what they say.” 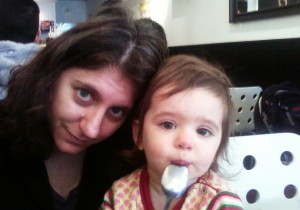 LISTEN TO THE FULL INTERVIEW

[…] shared her New Year’s resolution with the L.A. Times’ Jacket Copy and talked to the 30th Avenue blog about babysitter jokes, inspiration, and her favorite Astoria cafes. BAD MARIE, […]