One day last week no trains were running from 30th Ave station in the morning so commuters had to find alternative routes to work.  I wove my way walking down through Astoria to Queensboro Bridge and over the bridge to Manhattan where I got on the subway.  It got me thinking about the journeys people make across the city each day.  We barely pay them attention until something disrupts the routine.

Later that week I saw an aerial shot of a football game.  The camera looked down on the players from way up above the field.  Football, which had never struck me as beautiful before, suddenly looked beautiful.  Football aside though, I wondered what an aerial view of people’s journeys across the city would look like.

Those journeys range from the simple line of a work commute to the intricate paths of bicycle couriers (especially those who make their work a sport), to the meandering lines of a lazy weekend or of extreme urban exploration.  There’s probably not an inch of the city that hasn’t at some point been under a human foot.

An illustration of the journeys could look something like this. 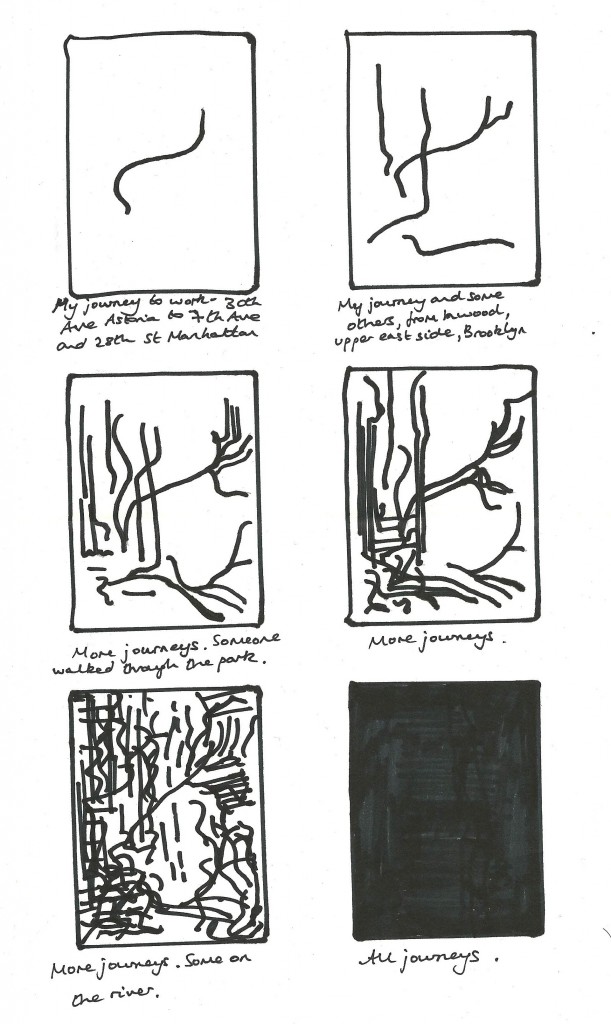 If I was a real artist the last, apparently black image, would have been created by layering thin pen line across thin pen line until the whole thing was filled in.  I don’t have the time or patience for that – maybe one day.  But say it had been created like that.  The black of that last image could be seen as oppressive crowding, or as the strong material of millions of woven paths.