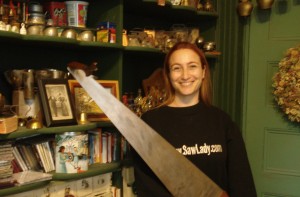 Natalia Paruz has lived just off 30th Ave since 1998, and in Astoria for longer than that.

“My name is Natalia Paruz, but everybody calls me the Saw Lady because I play the musical saw.

The saw has a very angelic sound.  A lot of people say that it reminds them of the sound of an opera singer.  I like it because the sound is so ethereal and spiritual.  I also like the visual.  Not only the fact it is a saw, which is kind of jarring because people don’t think that a saw would make such a beautiful sound.  But also because when you play a saw the entire instrument moves in the air and makes a sort of wave shape.

I got into saw playing by chance.  About 17 years ago my parents and I were in Austria.  We went to see a show for tourists and in it there was a guy playing a saw.  That was the first time I had encountered this instrument and I was mesmerized.”

Natalia had found what that she wanted to do.  Previously she was a professional dancer, but her dancing career was cut short when she was hit by a taxi in New York.  She had been at a loss as to what to do, until she saw the saw player.

“I went backstage to ask if he would give me a lesson.  He said no.  So I was forced to be self-taught.  That turned out to be a very good thing because I can say that I did it all on my own.

I came back here to Astoria and I borrowed a saw from somebody who had been using it for woodwork.  I discovered how to make a sound with it.  But it could only make six notes because it was an old and rusty saw.  So I went to the hardware store that used to be on Broadway and 44th Street, and bought a new saw.  Sure enough, the new saw had no rust on it so I was able to get a whole octave of notes.

Throughout the years I have collected more and more saws in my quest for the ultimate-sounding saw.  Finally I got the one I use now, which was made in France.  It’s quite long, 32 inches, which means it has about three and a half octaves altogether.

I moved to Astoria because my boyfriend Scott – now my husband – lived here.  When I first moved in with him I didn’t know anybody beside Scott.  At first I felt kind of lonesome because most of my friends were in Manhattan.

Then I picked up a local newspaper that was given out for free in banks.  I opened it and realized there were all these events taking place in Astoria.  I went to an event organized by the Greater Astoria Historical Society.  All of a sudden I started meeting people and had friends.

I fell in love with Astoria because it feels so much like a small village where everybody knows everybody.  Now I have so many friends here that I hardly ever bother going into Manhattan any more, except for my busking.

I once tried busking in a subway station in Queens.  But I was approached by the police almost immediately and was told that I can’t do that.  So the police are not as nice to buskers here as they are in Manhattan.

I know another busker who tried busking at the Steinway Street subway station.  It just so happened that at the same time there was a murder right there.  That sort of put people off wanting to play at that station.  It was just a coincidence.  It’s not like people get killed here all the time.

Busking on the New York subway is so much fun that it’s addictive.   The people, the proximity of the people is intoxicating.  I get so much energy from all the people who come to talk to me.  If I play on a stage, I’m up there in the lights and the audience is down there in the dark and I don’t really get to see their faces and their reactions.   So it kind of feels isolated for me as a musician.

On the subway I see the transformation on people’s faces as they are watching me, listening to me.  And they come to talk to me, to ask me questions, or tell me about themselves.  There’s this exchange of energy.  It’s as if the music is the impetus for communication.

Sometimes I might be playing in the subway and someone who’s a little scary-looking might be approaching me.  I will think oh no, he might be trouble, perhaps he’s going to steal from me.  And 99.9% of the time the scariest looking people end up being the nicest, kindest people.  Playing in the subway really taught me not to judge people by first appearances.

There are so many encounters every day on the subway.  I put them on my subway music blog.  If I was to describe just one really striking encounter it’s this one.  I was playing at Times Squares subway station, and there were a bunch of people around me.  On one side of me was a blind man.  He had a cane and you knew from his face that he couldn’t see anything.

He was listening to the music.  His face transformed into a big smile and you could really see that he was enjoying himself.  On the other side there was a lady, who had nothing to do with the blind man.  She noticed how he was enjoying the music.  She came to me.  She bought my CD.  She went over to the blind man and she put the CD in his hand and she said to him, ‘this is the music that you’re listening to right now.’  That was so incredible.   The lady didn’t know him or owe him anything.  She did this act of kindness to a total stranger.

I was born in Israel, though as a child we traveled a lot.  My mother was a concert pianist who gave a lot of concerts in Europe.  And my father was a research scientist, so he had to do research in different universities around the world.  We lived in different countries for a year here, two years there.

As a concert pianist, at first my mother kind of frowned upon my playing a saw.  She especially frowned upon the fact I was teaching myself.  She thought that you can’t just learn music by yourself.  You have to go to a proper school.

One day her agent was coming over to our house to work with her.   I asked my mother if she would mind if I played for the agent.  She reluctantly agreed, because she was so sure that he wasn’t going to like it.  I played for him and he LOVED it!  Right away he said ‘oh, we must incorporate you into your mother’s concert.’  He was so enthusiastic about my playing and that changed her approach.  I was a part of one of her concerts and the audience just went wild.

A huge part of the growing factor is the local community.  All the neighbors come.  When the time comes in July you’ll see my flyers everywhere – all the store owners around 30th Avenue agree to put the flyer in their front window.  Round the time of the festival last year I went to the Key Foods supermarket and the cashier was asking me, “so how many saw players do you have this year?”   Everybody is enthusiastic about it in the neighborhood, which means a lot to me.

The saw is my main instrument but I also play the bells.  They’re a lot more difficult to carry!  I play a set of 65 pitched cow bells.  I lay them on an eight-foot long table and there’s a special foam that goes on top of the table.  I play mostly ragtime music on those bells.  They have a very happy sound that lends itself very nicely to ragtime.  And I play a set of English handbells, which belong to Trinity Lutheran Church here in Astoria.  I play those as a soloist and also with their group.

I can totally see myself staying in Astoria.  We’re not going anywhere.  We love it here.” 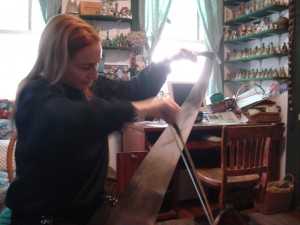 LISTEN to the full interview

And LISTEN to Natalia playing Amazing Grace on her saw (with the sound of me taking this photo and my little son Jack chiming a bell in the background).

@Natalia; You are really a fantastic person and I thank you for taking time to have informed me about this fascinating art form. Congratulations for your persevearence with your Saw Festival… Any cowbell Festival ?
Shalom + Salud.
Gabriel Hoefle from Caracas