Last Tuesday afternoon a group of long-time 30th Avers was gathered in Corner Delights Coffee Shop, on the corner of 30th Ave and 44th Street.   They were:

Mary Devitt: Her parents came from Ireland, and she has lived in Astoria for 44 years.

Jeanne O’Melia: Her mother and father both came from Ireland in the early 1900s, and met in New York (about which, more below).  Jeanne was brought up in Corona, lived in Jackson Heights a while, and came to Astoria in 1978.

Bill Nevins: He was born on the Upper East Side in Manhattan, and moved to Astoria in 1960 with his grandmother.  For the past 31 years he has lived on 30th Ave itself.

Danielle Pagliaro: She was born and brought up near 30th Ave.  Danielle works at Corner Delights.

Below are details from an animated conversation in which one memory triggered another, and another.

Denis:  We meet here every day.  If one of us doesn’t show up, the other one will call to see what they’re doing.

Mary: And we tell jokes and we laugh.

Denis: You can find us here four, sometimes five hours a day.

Danielle: When I was a kid here we used to have awesome block parties.  You would come outside in the summer and every block had people on the streets, kids.  Whether you lived on this block or that block, people knew who you were.  If you got seen doing something wrong, you’d be caught by the ear and dragged back to your mother.

Mary:  Each block had its own baseball team and own football team, and they played each other.

At six o’clock you’d hear the mothers calling out the windows, “Johnny, Billy, get up,” telling their kids to come for dinner.

You never had a kid being bored.  People used boxes and old wheels to make go-carts.  And then there was the bottle caps game.  We melted colored crayons into the caps to weigh them down.

Bill: And Johnny Ride the Pony.

Mary: There was a lady on our block called the witch, because she didn’t want kids playing there.  She would throw water out of her window onto them.

Danielle. I think every block had a witch. And a cat lady.

Bill: The schoolyards used to be so much bigger than they are now.  Public School 70 – that had the greatest yard anywhere.

Denis: Astoria has always been good.  When I came in 1960, I was a boy.  I went to high school over in Sunnyside.  It was all working people.  The prices were good.  And it was centrally located.  You were in the city in 10 minutes.

I married, and divorced, and have three boys – now they’re all grown up and married.  My ex-wife lives in the same apartment she was born in, at 30th Ave and 42nd Street.  And her father had moved there when he was 12 years old.

Mary: When we came here in the 1960s, the neighborhood was German.  German, Italian, and Irish, but more German than anything else.

St Joseph’s Church here was founded by the Germans.  Then of course you’ve got Kaufman Studios on 34th Avenue, the Steinway Piano Factory and Steinway Street.

A lot of people have moved out to the suburbs now.  Like the Germans moved out to Middle Village.  The Italians went out to Whitestone.

You get quite a lot of religions here too.  You had quite a lot of Jewish people in Astoria.  There were also Lutheran churches and schools.  And then down towards Ditmars there were mostly Greeks.

Bill: Steinway Street used to be a very expensive street.  People would come from Manhattan to shop there.  And this was like a vacation spot, like being in the country.  There used to be a Woolworths.  That was the best store in Steinway.   It had old wooden creaking floors.  You could get anything in there.  You could buy goldfish.  Anything.

Danielle: I used to go with my grandmother to get yarn, just so I could have the meatloaf and apple pie at the counter.

Mary: There were a lot of ice-cream parlors in Astoria too.  They sold egg creams [a drink made with chocolate syrup, milk and soda water].

Denis: One of the wonderful things was the Triboro Movie Theater.  The one that had the stars in the ceiling.  It was like the universe when you looked up.  It was heart-breaking to see it pulled down.  They knew it was a landmark but they ripped it down, overnight.  Now it’s apartments.

Bill: Along 30th Avenue there were a lot more bars.  From Steinway up to here I can think of seven bars that used to be here. Now they’re gone, and there are more cafés instead.  There used to be German delis too.

Mary: Phil’s Kosher restaurant on Steinway was great.  And the Steinway Bakeshop.  And Schaller and Weber, “All German Meats”.    Oh and the bakery down near the train, Norgards Bakery.

Bill: Mount Sinai Hospital on 30th Ave was Astoria General Hospital before.  Actually, Mr Drago built that. [The father of Rosario Drago, of RP Drago Funeral Homes on 30th Ave].  They’d joke that the father killed them and his son used to bury them.  Rosario Drago has died now, and the funeral home is in different hands.

There was a lot more green space.  I remember a farm just here.  And there was also a farm between 21st and 22nd Streets, and Broadway and 34th Avenue.  There was an English-style castle opposite it, with turrets and everything.  When I did my newspaper round when I was about ten, they gave me that castle to drop the paper off at.  I was afraid of it.  But when we heard that the guy there died, we became braver.  They’ve torn it down now.

I have a barn in the backyard of my house where they used to keep horses.  When I moved in there 31 years ago they still had the four stalls inside the barn.

Denis: Up where La Guardia airport is, that was called North Beach.  I don’t remember it, but the old timers talk about it.  They would go swimming up there.  That was like going to the countryside too.

Bill: 30th Avenue used to be much lower than it is now.   When you walk out the back of my house, you have to go a long way down.  That’s the original level of the street.  They used to have the sewers on that level too – they didn’t dig holes to put the pipes in, they just put them right there.

The houses along the streets off 30th Avenue, they’re Matthews Houses, built by the Matthews family.  They went up around the 1920s, after the elevated trains came.  They’re all made with yellow bricks from Pennsylvania.

You used to have to heat them with coal.  There was the front fireplace and the back fireplace.  You had a space in the basement where you could keep your coal.  My father used to say that if you saw no coal in a space, the people in that apartment were very cold.

Danielle: There were windows between each room for ventilation.

Denis: Down near the river you have all the old mansions.  The mansions from the sailing days.  Some have the captains’ walkways on the top, where the wives would watch their husbands arrive on the sailing ships.

I used to live in Corona, which was a very good place at one time.  I was born there.  I could tell you every store, everything about Corona.  Then I moved to Jackson Heights, and then I came down here.

I moved here because my mother was getting old.  She couldn’t climb the stairs any more.  We had been in a walk-up apartment for 20 years but we couldn’t stay.  My sister was here and she invited us down.  My mother lived to be a hundred.

She came from Ireland, and my father too.

She came in about 1914.  She was going to school to be a nurse.  She would go at night.  My dear father, he worked at nights too.  There was the token booth man at the station.  My mother would come through there to get on the train.  And my father too.  And the man behind the booth, he said to my father, “you know there’s a nice young Irish girl who comes through here every night, she goes to school.  Maybe you’d like to meet her”.

And that’s how my mother met my father!  They got married.  My mother never became the nurse.  She was a nurse to all of us.  She had six children.

Mary:  One of the best things about 30th Avenue, is you’re near to all the conveniences, to shopping, to churches, to the subway and so on.

And you have a wonderful mix of people here.  That keeps us all grounded. 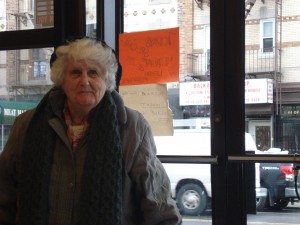 […] the interviews with Bob Singleton of the Greater Astoria Historical Society and a group of Astoria old-timers at Corner Delights café, and the post about 30th Avenue’s former ice cream […]

It is so nice to hear the old stories.
While I am not from Astoria, one could close there eyes and just imagine you are in your own neighborhood.
The names change, but usually the stories do not.
Good blog….

Many thanks – I’m glad that you’re enjoying the blog!

Corner Delights closed in the middle of the night last night. Story is developing but it seems the current owners?managers? took everything and left.

What a shame – I look forward to finding out more. I’ll head up there on Friday afternoon to check it out, and hopefully find Bill, Danielle, Denis, Jeanne and/or Mary…