Just beyond George’s Auto Repair at the far western end of 30th Avenue are some walls covered in graffiti.  But this isn’t usual graffiti tagging.  The walls form the Welling Court Mural Project, and the murals on them were painted by graffiti artists from all around the world.

Welling Court resident Jonathan Ellis came up with the initial idea for the project.  I met with Jonathan and his wife Georgina Young-Ellis to hear about graffiti, the neighborhood, and block parties.

Both Jon and Georgina are originally from Los Angeles, but they met in New Mexico where they lived for a while and had their son.  Georgina had always wanted to move back to New York, where she had studied drama in the 1980s.  Thirteen years ago they did.  They lived for three years on Astoria’s 12th Street, then after many months of house-hunting bought their house on Welling Court.

Welling Court is a small street that loops in a half-moon from 30th Ave to 12th Street, close to East River.

Georgina says,“When we bought the house ten years ago, Welling Court was a bad street.  There were a lot of good people on it, who are still there now.  But there were also crack houses.  One was right next door to us. We just kept being persistent about calling the police when that was going on.”

She says that together with their neighbors they have turned it into a family neighborhood, “without gentrifying, without throwing anyone out.  Except for crack-heads and prostitutes.”  A lot of kids live along the street.  Given that it doesn’t have much traffic they play soccer along it when the weather is warm.

The community at Welling Court is mainly Mexican – the neighborhood is referred to locally as Little Mexico.  “We really value that,” says Georgina.  “Being from the south west and having come here from New Mexico, we felt at home.”

Each December 11th local residents hold a fiesta for the Virgin of Guadalupe.  They build a shrine on the street, bring out piñatas and lots of food, and have music that goes on well into the night.

Jon and Georgina spend a lot of time in the neighborhood: other than Georgina’s teaching of English as a second language, their work, as artists, is based at home.  They are currently working to get their feature-length screenplay produced.  Jon recently published a book on weight control, and Georgina, an e–novel.  Georgina also acts, and Jon designs websites.

“It was just a graffiti magnet,” Georgina adds. “It was ugly.  And kind of sad.  We never knew when they were doing it.  It would just appear.”

Yet Jon says that he had also “always kind of admired graffiti.  When it was nice!  I saw a piece of programming on CBS Sunday Morning that was about an event in Paris each year, when graffiti artists from all over the world converge and do their works.

So I got it in my head that there was no reason why we couldn’t somehow manage to pull that off on Welling Court.”

He spent two years trying to get people to work with him on the project but found it hard to get them involved.  Then a friend suggested he contact a Brooklyn-based group called Ad Hoc Art.  Ad Hoc invited thirty graffiti artists to come and paint the walls around Welling Court.

“We had to get permission from every business whose walls are used,” says Jon.  “That took a while.  There was a little resistance.  Especially from the school bus company.  They didn’t know what to expect.  And there’s a hierarchy there that was hard to get through.  But once I was able to talk to the main person there, she was interested and said go for it.”

One artist, M-City from Poland, came a few months before the others, in December 2009.  A neighbor had an empty apartment that M-City stayed in for a few days while he worked.  Jon and Georgina were away at the time on vacation.

“When we came back home from vacation it was very late at night,” says Jon.  “We were in a cab.  We drove up along Welling Court and I was so disappointed, thinking, ‘oh it didn’t happen.’  There was nothing on Welling Court.  Then the next morning I walked out and on 30th Ave of course there was this magnificent piece of work.  He’d painted a different wall to the one we were expecting.”

The other artists came from Brazil, Chile, Denmark, and elsewhere – and some were local New York City artists.  They arrived on May 19 and by the end of Saturday 22, eight walls had been covered with murals.

At one point while they were painting some people who worked for the bus company but didn’t know that the artists had permission, tried to intervene.

Jon says, “Apparently people who were in the neighborhood watching the artists literally stepped in and stood up for them, and said this is great, we want it.   To me, this project is all community building.  And as it turns out the bus company are now really forthcoming about allowing us to control the outside of their walls.

“People are coming in from outside the neighborhood to photograph it, to video.  Music videos are being made on the street.  It’s bringing a different sense of what a block is.”

“And that’s without any sort of Williamsburgian gentrification,” says Georgina.  “It’s not like we’re a community of all artists, where everybody’s thinking ‘let’s make this into art mecca.’  This a community of mostly working people, largely immigrants.  They all are just excited that their street is not going to have ugly graffiti but instead will have something pretty interesting, unusual, and eye-catching.”

Many of the artists said that the murals would probably get tagged soon after they were painted.  But almost a year has gone by, and many of them remain un-tagged.

This June the project will happen again.  There’s more wall-space to be covered.  Also many of the artists are going to come back and re-paint over the areas where they have already painted.

Then when the artists came in 2010, they combined the painting with the block party.  People from all over New York showed up.  Some, though, came just with their own drink.

“It wasn’t that they were taking things from anybody else,” says Jon.  “But you know, they just brought drink for themselves.  I really would like to instill this year that feeling that we’re a broader community and that we’re all sharing.

“And if they can’t share food or drink, I’d ask that they make some contribution to the artists.  The artists are there doing an incredible thing not just for Welling Court and the blocks around it, but for all of Astoria.  And indirectly for all of New York.”

For many years Georgina has belonged to a group called Long Island City Alliance, which brings people together around issues like graffiti and over-development.  She says that the alliance played a big role in helping to get a new down-zoning introduced in Astoria.

The zoning restrictions make it harder to build tall buildings on blocks that are dominated by two-family homes.  They allow larger buildings on streets where some already exist, like 21st Street.

Jon says, “Developers in some areas realized that the down-zoning was going to be inevitable.  Builders came in and tore down some 150-year old homes.   They knew that the community wouldn’t like it so they literally would go in and knock a house down in a day.”

He says that some development is good as long as it’s done right.  Examples of what works, in his view, include the Astor Bake Shop, where we had this conversation, and Vesta restaurant on 30th Ave and 21st Street.

He says of Astor Bake Shop: “It was daring for him [chef-owner George McKirdy] to open this place up.  To have that forward-thinking idea that this could work here, without changing the neighborhood.  And it does work.  It fits into the neighborhood.  People who live here come here and support it and love it.  I wouldn’t mind seeing more of that.”

Another example Jon gives is the Piano Factory building on Vernon Boulevard by the river.  The inside of the building was gutted and turned into condominiums but the outside was completely maintained.

Georgina agrees that a balance is needed. “The tradition of New York City is development.  You can’t really say no, we are not going to build buildings and develop.  But I’m optimistic because of the progress we’ve already made in really keeping a handle on it.  Keeping it under control, guiding it.  I’m optimistic that this area and other small areas in New York City can grow and develop in a good way.

“And that we can do it without driving people out of their homes and rentals.  That’s a big thing for me.   Jackson Heights is going through something like that.  There are cool local communities, where the more people who want to live here, and the more wonderful  little restaurants get built, the more rents go up and the more that people who were living there a long time get driven out.  Then big box stores come in and suddenly it’s not so desirable any more.  It’s this whole wave of things that happen.

10 min video by Kings of New York: “Welling Court Mural Project” (interviews with some of the artists in May 2010)

Jonathan and Georgina’s blog “Searching for Sincerity” where they rank places on a “sincerity scale.”  Their 10 factors of sincerity include: locally owned (as far as they can tell); not connected to a large corporation; friendly service; value; quality; they love what they’re doing. 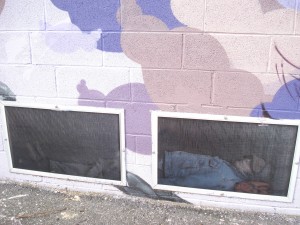 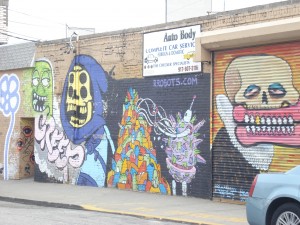 […] Coves Community Garden is just outside Astoria Houses].  “There weren’t the murals” [the Welling Court Mural Project].  “From when I was living here to when I came back to start this program I’ve seen how […]

[…] moved out, others came in and people on the block didn’t know one-another.  Welling Court’s annual block parties and mural-painting have changed that.  “Now I know all my neighbors.  It brings us together in a pretty […]

[…] and paint over some of the old murals, for the Welling Court Mural Project.  I had interviewed Jonathan Ellis and Georgina Young Ellis, who live along Welling Court, earlier in the year.  Walk to the far Western end of 30th Ave and […]

[…] the far Eastern end of 30th Avenue, close to the East River and the Welling Court Mural Project, is Two Coves Community Garden.  A mesh fence encloses a triangular patch of land split up into […]

Great to hear – thanks for the message

I live on Welling Court now and the graffiti was a great pull to the area.

Locals – the murals have changed! come back and take a peek!

Yes and they look great! Have some pics of the new ones that I’m planning to post this weekend