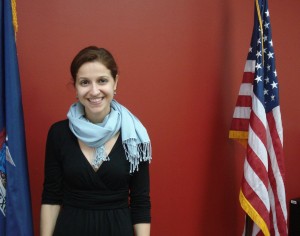 Aravella Simotas, 32, is the New York State Assemblymember for district 36.  Her district covers all of Astoria (30th Ave included) and some of Long Island City.

She describes her job as “legislating in Albany for the people of Astoria.  My constituency – who I consider my bosses – live here in my district.  My job entails going to Albany and ensuring that their interests are accounted for, and that I advocate for them.”

Simotas came to Astoria with her parents from Greece when she was six months old.  She has been involved in community work here since high school, and when the seat became available in 2010 she was a natural candidate.

Not that she had established it as a career goal.  “Albany seats in New York City are like a cheap one-bedroom on the Upper East Side.  It doesn’t happen!  Or if it does happen, it doesn’t happen often at all,” she says.

But last year the senator who represented Astoria and its neighboring districts like Woodside and Ravenswood – George Onorato –  retired.  District 36 Assemblymember Michael Gianaris ran for and got the New York State Senate seat, leaving his former Assembly seat open.

Simotas is the first Greek-American woman in the Assembly.

Simotas says that Astoria has always been a growing community of immigrants.  “It’s a place where middle class people have come to raise their families and look for the American dream.”

Her own story is an example of this.  Her parents arrived from Greece “with two suitcases in their hands”.  Their family (the parents, Aravella and her brother) lived in a one-bedroom apartment.  Simotas’ father worked in a delicatessen, then bought the delicatessen, and eventually bought his own home in the neighborhood.

Simotas went to elementary school at PS17 on 30th Ave.  Then she attended Junior High School 126 and William C. Bryant High School, both also in Astoria.  She also took classes at St. Demetrios, the largest Greek-American school in the US, which is two blocks below the 30th Ave subway station.

“My parents always instilled in me that you should know your culture and your roots.  So five days a week after normal school I went to Greek school!  That’s what a lot of children of Greek immigrant parents did.  And they still do.  Even the second generation.

“Growing up you don’t want to go to two schools, have no time to play with your friends or watch television, all the things kids usually do.  It was about 20 years later that I truly appreciated the fact that my parents did that.”

They encouraged her to excel in English school too.  “If I got a ninety-five on a test and not a hundred my mom would sit there and ask why I didn’t get a hundred!  She knew I had the capacity and she wanted me to live up to it.  My parents’ mentality was, ‘we come here and we worked very hard to give you guys opportunities.’  A typical American story.”

Simotas says she particularly appreciates what she calls the “immigrant values” that her parents instilled in her.  “Those are values of a very hard work-ethic, of always keeping your word, and always giving back to your community.”

While in college at Fordham University Simotas worked with New York City Council, in their Office of Oversight and Investigations.  She examined issues like how the MTA was spending taxpayers’ money, and the sale of lottery tickets to underage minors.  It gave her a taste of how government can change things.

Then while at Fordham Law School she served as the local district representative for former city council member Peter Vallone Senior, and went on to run his son’s campaign in 2001.  After leaving law school, she worked for a while in the federal court system before becoming a commercial litigator – all the while remaining a member of Queens Community Planning Board 1 and serving on other local boards.

Challenges of being a new – and a female – Assemblymember

Simotas says she faces two particular challenges as a New York State Assemblymember.  She’s new, in an institution in which many hold their seats for years and years.  And she’s a woman – currently only 23% of the legislature (i.e. Senate and Assembly) are women.

The gender in-balance has a lot to do with the tough schedule, Simotas says.  From January through June she has to be in Albany for three days a week – four in March during the budget period.  Then for the remaining days, including the weekends, she’s working in Astoria and attending community events.    Her working days often extend to two or three in the morning.

“It’s a similar situation to the field of law.  When many of my female colleagues reached a certain level and were either ready to have a family or to have a second child, they just didn’t think that there was a way to balance it all.  Sometimes people also convince themselves they can’t do it.  You have to make your own set of rules and you have to make it work for you.”

Simotas has been married for six years, and while she does not yet have children, she hopes to someday, and to find a way to strike that balance.

As a new Assemblymember, a big challenge is learning the unwritten rules.  “To actually understand how to get something done, you’re not going to read it in any rulebook.  You have to develop relationships and learn how to move something through the Assembly.”

Simotas says her colleagues’ advice has been a crucial help so far, in navigating the Assembly and in managing to get her first bill through within 12 weeks of having started work (a change to civil law that cuts red tape for litigants who want to discontinue their lawsuit).

“The leadership in the Assembly, and particularly the women, have been so generous with their time and sharing their institutional knowledge.  You would think there might be some kind of rivalry but absolutely not.  I haven’t felt it at all.”  She also receives advice from Senator Gianaris (her predecessor), whom she considers her mentor.

As well as guidance within the legislature Simotas has support at home.  Of her husband John Katsanos she says, “he has been tremendous – the most supportive person in the world.  Everyone asks me how my husband’s taking it and I say, ‘ honestly, he gets more  excited about it than I do!’  I get home and just don’t want to talk about Albany, but he is so engaged.   That’s the key to it.”

One of Simotas’ big causes is Astoria’s small businesses.  “They are the backbone of our local economy,” she says.  “They employ many of our residents and they add so much revenue to New York State.”  She’s all the more motivated to support them by the fact that her parents are former small business owners.

Yet they face a lot of challenges.   To give an example, Astoria’s many restaurants and cafés are often slapped with fines by the health department for not complying with new regulations that have been drawn up just the day before.

“I’ve patronized the same restaurants since I was a kid,” says Simotas.  “There’s a pizza store, Grand Avenue Pizza, on 30th Ave and 35th Street.  It’s one of my favorite establishments.  The owner told me that the Department of Health fined him $ 1400 because he was displaying pizza with meat outside of a refrigerator.  It was a brand new regulation that came out.”

The fine ended up costing the owner an additional $10,000.  He bought the refrigerator from the first vendor he could find because he was worried about complying as soon as possible, and also had to pay to get alterations made in the restaurant to get it installed.

“Of course, the department has to regulate these issues,” Simotas says.  “They should be protecting our health.  But it’s unfair to fine somebody on a new regulation and not give them time to comply.  They gave him no notice.”

She has written a bill that would prevent the Department of Health from enforcing a new regulation for 60 days, and would also give the businesses written notice of new regulations.

Another important issue for Simotas is protecting tenants.  “There are a lot of tenants here, and many things have happened in the past few years that are not fair to them.”  The law is currently biased towards landlords and she wants to help change that.

One of the first bills Simotas authored was to ban toxic toys in daycare centers.  While she was campaigning last summer she visited a daycare center and noticed that while half the markers the kids were using were labeled “non-toxic”, the other half were not.  She says she was surprised that there wasn’t already a law preventing daycare centers from using toxic toys.

The camaraderie with other Assemblymembers, and setting herself clear goals to get bills passed are two aspects of Simotas’ job that she most enjoys.

She least enjoys waking up on a Monday morning and having to drive 155 miles to Albany.  “Especially when you get onto the throughway and there’s traffic!  I’m used to utilizing every minute of my day.  So the fact I have to be sitting in my car so long driving is hard.”

Not surprisingly, Simotas has found productive ways to use that time too.  She listens to books on tape.  She has set up hands-free calling in her car so that she can take calls.  And she records her notes and listens back to them during the drive.

As well as working the system to get bills passed, Simotas is also working to change how the system in Albany works.  She’s a member of the committee that steers the direction of the Assembly and proposes reforms, and says it was a real honor as a freshman to be put on that committee.

“Something we know we need to be doing is making the Assembly more accessible to the public.  Making it more open.  There’s a huge need for that.”