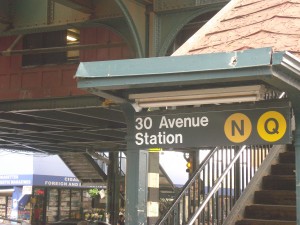 [Picture of Miss Jones to come]

A few times a week you can find Miss Jones (Jacquie Jones) in the booth at the 30th Ave subway station.  She has worked for the MTA for 14 years.

Miss Jones says: “Working at 30th Ave is like working for the UN.  You’re an interpreter, therapist, GPS system.  You work with the disabled, the mentally ill, the lost, the hurt, I mean you name it I probably did it.  Some days it’s hard to get started, but when I get there it is always an adventure.”

Miss Jones was born and brought up in Jamaica, Queens, in a “house full of strong women.”  Her father died when she was two.  She and her sister were brought up by her mother, grandmother and aunt.  In the summers when there was no school, she accompanied her mother to her job working as a housekeeper in Long Island.  “Getting on the Long Island Rail Road and going to my mother’s job with her was how I got my people skills,” Miss Jones says.

In 1989, Miss Jones moved to Astoria with her daughter.  “I had put in an application for public housing and was accepted.  I had a son in 1993.  I took the MTA test and got the job with them in 1997.  I was a single parent by then.  I enjoyed living there, on my own.  I don’t know why they call it the projects when it’s an apartment like any other.

“But still, I always wanted to go back to Jamaica.”  In 1999 she married, and did move back to Jamaica.  She’s now divorced but still lives there with her son and her mother.

Miss Jones works in many different subway stations.  Staff rotate depending on whether they want to work mornings, afternoons or nights.  She has worked on the 7, the L and the J trains, and likes to move around.

The crowd that comes through the 30th Ave station is diverse.  “You get all kinds of people at any time of the day or night.  That’s what happens when we’re a 24 hour system.”  She says that the moments she enjoys most about her work is when she does something for someone that is appreciated.

One of the hardest parts of the job is, “when the machines break down or don’t have enough change.  The credit card people are always mad with us like it’s our fault.”

She also says that there is more aggression by passengers towards the station staff than there used to be.  “It gets more every time the fare goes up.  Or if they put in the paper how we got a raise, and the public think we don’t do anything.  It comes from us following the rules and trying to do our jobs, and from people wanting to have their way.”

How does she deal with that aggression?  “I silently pray!  And I say bread and butter, and/or count to 10!  You have to be professional.”

She says MTA workers’ jobs have become all the more challenging because a lot of booths have been removed, so passengers often get to a station and find no-one there to help.  She hopes the MTA does not get rid of all station agents.  “No matter what, people still like the human factor.”

I love this interview! I see Miss Jones every day and I’ve often talked with her but I didn’t know anything about her life. I can’t wait to tell Miss Jones that I read about her here!